compiled from two articles by

and Arcturus the 'bear keeper'

Translated from the French and compiled by Jeff McMahon, May 2003

ABSTRACT: The following passage is compiled from two articles written by H. d’Arbois de Jubainville, a scholar of Celtic mythology at the College au France and the former director of the journal Revue Celtique. These passages trace the history and mythology of two related ancient Celtic words for bear: art or artos and math or matu. After demonstrating the divine connotations of Artos, Prof. d’Arbois draws parallel conclusions about math and the names derived from it, including Mathghamhna, or as it is written today, (Mc)Mahon. The main body of the text below comes from his 1905 article. Excerpts from the 1889 article have been interspersed to clarify or expound upon a point, and these excerpts appear in brackets. The final two paragraphs are the most immediately pertinent to the surname (Mc)Mahon. (JM) 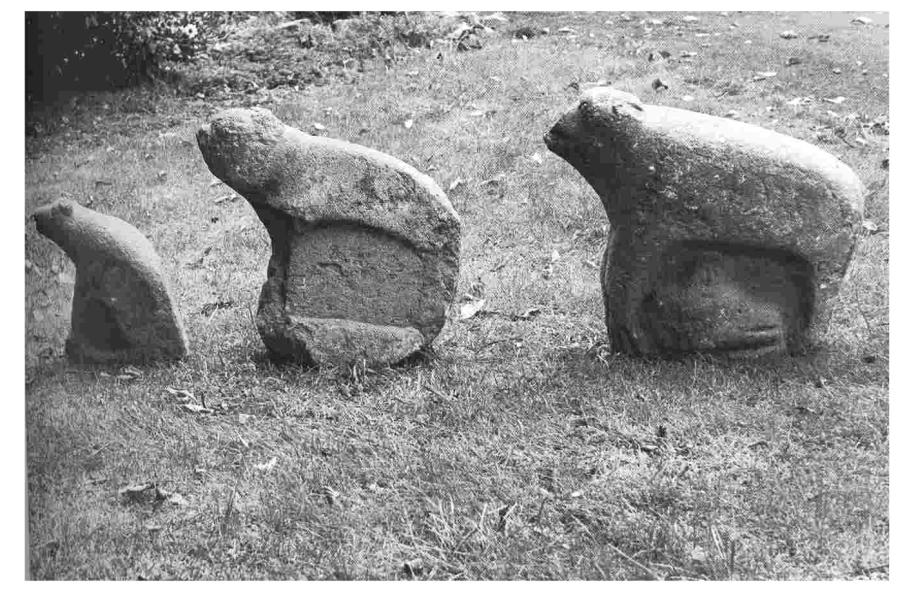 in the Cathedral of the Church of Ireland in Armagh

There is an animal which did not appear on Roman insignia and which was higher in divine rank in the Celtic world. It is the bear. In ancient Ireland there were two names for this animal: the one is art, identical to the Greek arktos and to the Welsh art, arto-s. The other is math, with the genitive matho, which relates to the primitive theme matu-

[In Ireland, the word art, bear, fell into disuse as the name of an animal but survives in the older literature as the name of god in general. One finds the same applies to Jesus Christ. (1889)]

In old Ireland, art came to be a synonym for dia, “god.” It is said of Eochaid, Irish prince of the 13th Century A.D., that he was handsome like an art, that is to say, handsome like a bear. In fact, this means that he was handsome like a god. When the hero Cuchulain was in hiding, but had not yet died, he appeared to his friends and he said to them: “A noble art has been cut down (romemaid art uasal).” What did art mean in this phrase?  A little reflection tells us: art signifies dia, it speaks of a god. That is what one reads in the glossary composed by Cormac, who died at the beginning of the tenth century.

In Gaul there was a divinized she-bear, and she was called Dea Artio. In Volume 11 of the Revue Celtique, M. Solomon Reinach studied a group in bronze, found in Switzerland near Bern, which represents a bear accompanied by a woman. At the base is an inscription dedicated to Deae Artioni. The woman is a sacrifice in the manner of the Greek artists. To the Dea Artio of Bern, one can compare the Gallic goddess Dea Andarta. And-arta is a great bear raised to the rank of divinity, while from the expression Dea Artio, one can conclude nothing about the size of the sacred animal. It is necessary, it seems, to use the name Artos of the divine bear to explain the place names Arto-briga in Vindélicie and Arto-dunum, today Arthun, in Loire. Arto-dunum, “fortress of the god Artos,” can be seen as a counterpart to Lugu-dunum, “fortress of the god Lugus.”

To these place names, one can compare the Welsh proper name Arth-gen, “son of the bear,” that is to say, son of the bear god. This was the name of a Welsh king who died in 807. In Gallic (the Celtic language of Gaul), this name was Arto-genus or Arti-genos; In the “Descriptio mancipiorum ecclesie Massiliensis,” published by B. Guérard in the Cartulaire de Saint-Victor de Marseille, one sees mentioned a colonica in Artigenis: This is a group of colonists established under the fundi Artigeni, so named because of a former proprietor named Arti-genos or Arto-genos, “son of the bear god.” The Irish form of this name is Artigan: from which comes the surname O’Hartigan, “grandson of the son of the bear god.”

One finds in the Roman Empire some examples of the divine name Mercurius used as the surname of a man. Art, in the Irish texts, also appears as the name of a man. There was in Ireland in the 2nd Century a high king named Art Oenfer “Art the Lonely,” or Lonely Bear. In 825 according to one chronicle, and 827 according to another, Art, son of the Irish king Diarmait, was beheaded. From the name of this man Art comes the name Ua hAirt, who we encounter in the Chronicon Scotorum under the dates 1012, 1083, and 1095. Today one says O’Hart, which means “grandson of the bear.” One finds also Mac Airt, “son of the bear,” that is to say, son of the bear god.

[One of the causes that contributed to the adoption by certain persons in the Celtic world of the name Artos and the names derived from Artos, is religious sentiment. The bear was considered a divine animal. The Celts divinized the bear, the most formidable animal of the forests, and the crow which, after battle, gnawed on the corpse of the vanquished warrior. The Germans had similar beliefs. In Scandinavia, bear, bjorn, was one name of Thor, the god of thunder, and a crow perched on the shoulder of the great god Odin. In the first centuries of the kingdom of France, some parents gave to their sons the names Bero (bear), Chramnus or Hrabanus (crow), in keeping with the spirit of these religious beliefs. (1889)]

[From the study of the word Artos, which is one of the words for bear, we cannot separate the study of the theme matu-, which is another name for the same animal. The Irish expressed Matu- as math-, genitive matho, which M. Windisch gives in the glossary of his Irische Texte. The modern dictionaries furnish the compound Math-ghamhain or math-ghamhuin , in which the second term means “calf.” Math-ghamain properly meant the calf of the bear, or bearcub. Yet this word signifies only “bear” today. This is the expression which in the Irish translation of the Bible corresponds to the Latin word ursus. Mathghamhna, the genitive singular of Mathghamhain, is today spelled “Mahon,” and this is the second part of the family name MacMahon, which is written in Irish, Mac Mathghamhna, and which means “the son of the bear.” (1889)]

Let us pass to the Irish word math = matus, “bear.” This word, uncommon today, must be recognized in the primary term  mathghamhain, “bearcub.” Gamhuin, or gamhain, signifies “calf,” and so the literal sense of mathghamhain is “calf of bear.” Matus “bear” appears as the first term in the Gallic male name Matu-genos, son of the bear, that is to say, son of the bear god. Matu-murus, “great like a bear,” refers to the bear god. The Gallic god Matunus has a name derived from the theme Matu-. Matunus, a Latin form of the Celtic Matunos, has a variant, Matunnos, which provides the second term for the Gallo-Roman name of the city of Langres: Andematunnum. Andematunnos would have signified “great bear.” Andematunnum, then, is the fortress of the great divinized bear. One can compare Ande-camulum, the fortress of the great god Camulos…. As for Matu-genos, “son of the bear god,” the second term is identical to the one in Camulo-genus, “son of the god Camulus,” the name of a chief who Julius Caesar defeated, and who was one of the numerous victims of the pitiless war in which Gallic independence succumbed. There is an Irish proper name that expresses the same idea as the Gallic Matu-genos. It is Mac-Mathghamhna, written today with the English spelling Mac Mahon, the name of a very widespread family who we find for the first time in the Annals of the Four Masters in 1283. This name means “son of the bearcub.” One sees appearing during the 11th Century the name of Ua Mathghamhna carried by a king of Ulster killed toward the year 1068. Today one writes O’Mahony, and this is a family name of which the examples are numerous; It means “grandson of the bearcub.” From the year 974 appears to date the death of a king of Munster named Mathghamhain. One can raise some later examples. Naturally in Ireland certain men received the name of the bearcub god just as others today carry, for example, the name of the patriarch and of St. Joseph. 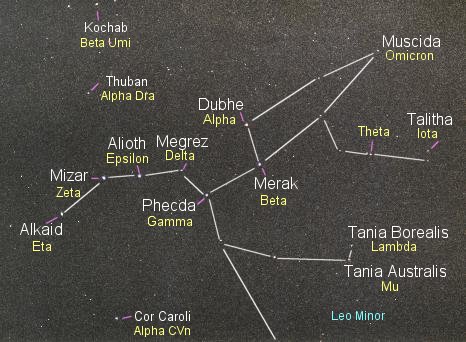 The bear of Ursus Major

There is an ancient celtic myth about the sleeping bear gods who will rise from hibernation and come to the aid of their people when called.  This burden or obligation is borne by those with the name Mahon.

For those of us who live outside of Ireland, click on this link to learn how to pronounce both our current name: McMahon, and our ancient Irish name: Mac Mathghamhna: Pronunciation of the names McMahon and Mac Mathghamhna - requires Windows Media Player.

The Origin of Irish Surnames