From the Collas to the MacMahons 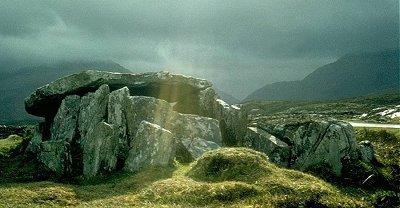 The conquest of the Ulaid only began the story of Airghialla.  What took place afterward is of equal interest but considerably more obscure.  And it is this evolution of circumstances that led eventually to the MacMahons' ability to become Kings of Oriel.

An article written by the Reverend P. O. Maolagian entitled Ui Chrimthainn and Fir Fernmaighe (The County Louth Archeological Society Journal, 1947) traces the Kings of Airghialla from Cremthainn, a fourth generation direct descendent of Colla da Crioch (see na tri Colla), to the times of the Lords of Fernmaig (see Clan Nadsluaig).  Eochaid (or Echu), son of Crimthann (see Ui Chrimthainn) is mentioned in the Tripartite Life of Saint Patrick as king of Lemhain, the Clogher Valley in County Tyrone.  He was a contemporary of Saint Patrick.

Nearly all of the kings of Airghialla descend from Cremthann.  We do not have all of them listed in the genealogy on this site because some were not of Clan Nadsluaig and it has been our primary concern herein to trace the lineage of the MacMahon Kings.  The chiefs of Airghialla are listed here: Kings of Airghialla.

Cremthann is the eponymous ancestor of the Ui Chremthainn, meaning only that the tribe was subsequently named after him.  The purpose of Rev Maolagian's article was to document the consistent recording of the descendants of the Collas after Dr. T. F. O'Rahilly wrote saying that the Collas never existed.

As stated on the previous pages, the Airghialla was a federation of tribes or numerous clans and was never a cohesive kingdom in the traditional sense that word implies.  This was perhaps due to the fact that they were always subservient to the high King of Ireland and his offspring, the Ui Neill.  The map just below shows the massive territory occupied by the Airghialla and the territories of each of its clans.  The various historical annals do not mention the kings of Airghialla as playing key roles in the history of Ireland in the same way as the kings of the Ui Neill or Ulaid.  These latter two tribes were much more aggressive when it came to national affairs and in fact were ancient rivals for the High Kingship of Ireland. 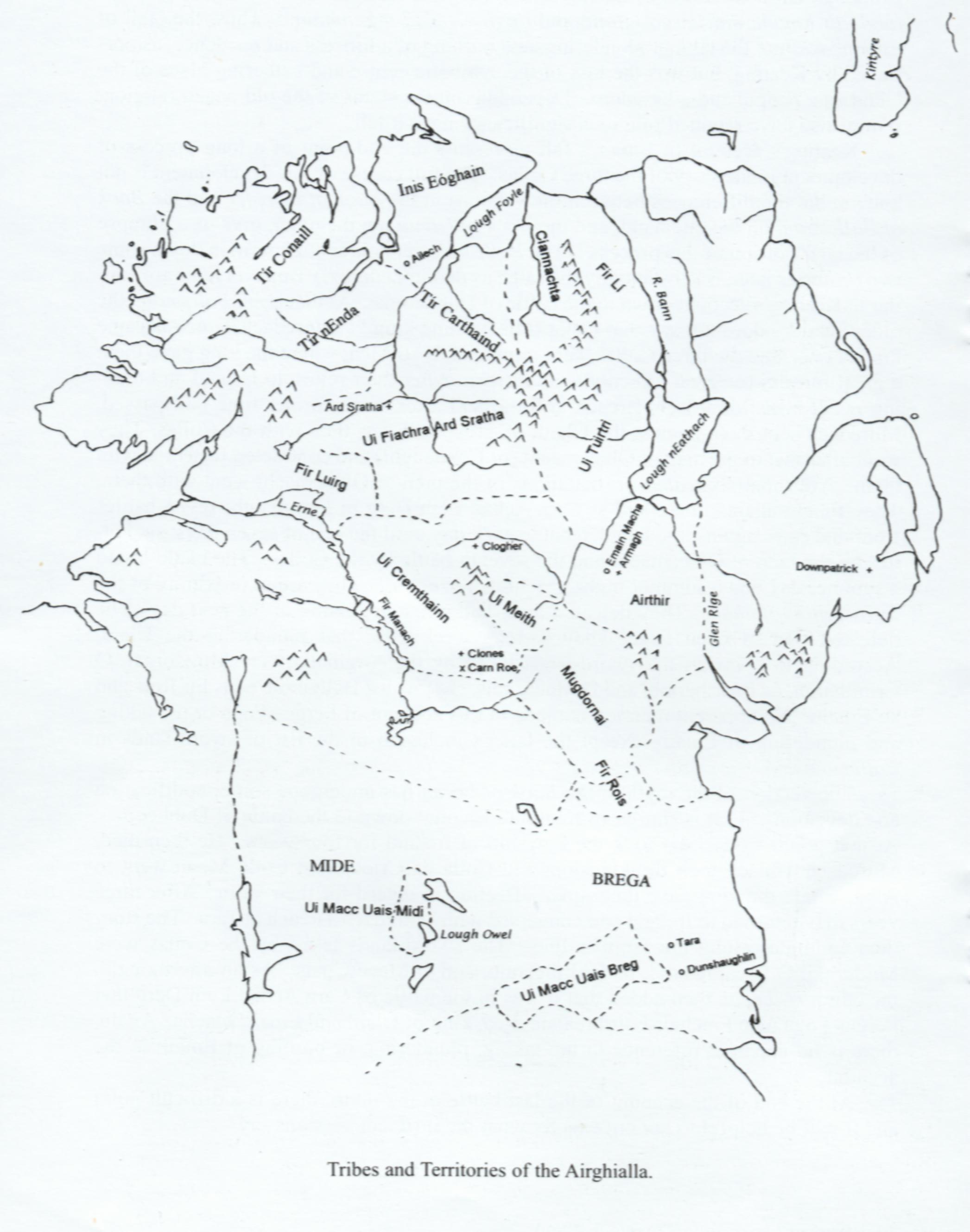 By the year 697, with the defeat of the Airthir and inroads being made against the Airghialla on all sides, including increasing pressures from the Cenel Eogain and the Ui Neill, the Ui Chremthainn were the only branch of the Airghialla not significantly weakened by the advances of other tribes.  This remained so until 827 when they were defeated by the Cenel Eogain in the battle of Leth Cam.  In response to this defeat however, the Ui Chremthainn became more aggressive.  For one, they assumed the title of Kings of Airghialla.  Four subgroups emerged from the Ui Chremthainn.  These included the Clann Lugain of Fermanagh, Clann Ceallaigh who controlled the area between Fermanagh and Clones in modern county Monaghan, the Sil Daimini who ruled a portion of Fermanagh, and the Ui Nadsluaig of Monaghan, from whom the O'Carrolls and MacMahons descend.

The Ui Nadsluaig ruled at Lough Ooney from around 700 AD but subsequently became prominent throughout the extent of modern day County Monaghan around 1000 AD.  This was a time of great turmoil throughout all of Ireland as the concept of an Irish High King took on greater importance and various families struggled to assert their claims.

To the north the Ui Neill were dominant.  To the west Clann Lugain, also descendents of Chremthainn were dominant.  This left any expansion by the Ui Nadsluaig to the east.  The eleventh century saw the breaking up of the kingdoms of the Ui Meath, Fir Rois, Conailli, and Mugdorna.  Some families of the latter tribe moved east to south Down, giving their name to the Mountains of Mourne.

As the Ui Nadsluaig moved east and southward into Monaghan, two other kingdoms remained in place.  These were the Ua Baigeallain family of Dartraige and the Mac Murchadha family of the modern barony of Truagh.

Also as the Ui Nadsluaig moved eastward, some families moved and some remained behind.  One of the families that moved eastward was the Ua Cerbaill (or O'Carroll).  Of the families that remained behind, one was Mac Mathghamhna.  The O'Carrolls became dominant in the east.  These O'Carrolls were known as the Lords of Fernmaig and brought that name eastward with them, resulting in the modern day barony of Farney in south Monaghan, east of its point of origin.  The O'Carrolls seem to have become more dominant in County Louth than in Monaghan.  At about this same time, surnames were coming into existence.  The eponymous head of the O'Carroll clan was Caireall, who lived about 950 AD.

The Connacht king from 1114 to 1156 was Turlough O'Connor and he is said to have been the strongest (or most powerful) man in Ireland.  It was he who established Domhnall O'Carroll as king of Airghialla in 1125.  Domhnall died that same year.  Donnchadh succeeded him and became a figure of national import.  Both were descendents of Mathghamhain or Mathgamna, Lord of Fearnmaig, who died in 1022 and who was the eponymous head of Clan MacMahon.

Donnachadh O'Carroll died by accident in 1168 and was succeeded by his son Murchadh.  This succession coincided with subtle but significant advances by the Normans.  In 1178 John de Courcy (a Norman) marched toward Oriel but was routed by Murchadh and Rory, king of the Ulaid, at Gliury.  Soon afterward they fought another battle "on the frontiers of Dalaradie, near Farnia" (Farney) where de Courcy barely escaped with his life.  Murchadh seems to have had his hands full attempting to keep the Normans at bay but at the time of his death in 1189, he remained substantially the king of all Airghialla.  Prior to his death he retired to the abbey of Mellifont, where he was buried near his father.  He was succeeded by his son Muircheartach who remained king until 1194 when he was captured, blinded, and hanged by the Normans.  This ended the O'Carroll reign over Airghialla and created the opportunity for the rise of the MacMahons....

Next Chapter: From Bandits to Kings ~ Niall Mac Mathghamhna

Return to Introduction to Genealogy

this map shows clan locations within Airghialla as well as neighboring dynasties:

this map shows the location of Ui Cremthainn and Oirghialla: