An Ancient Link to County Down 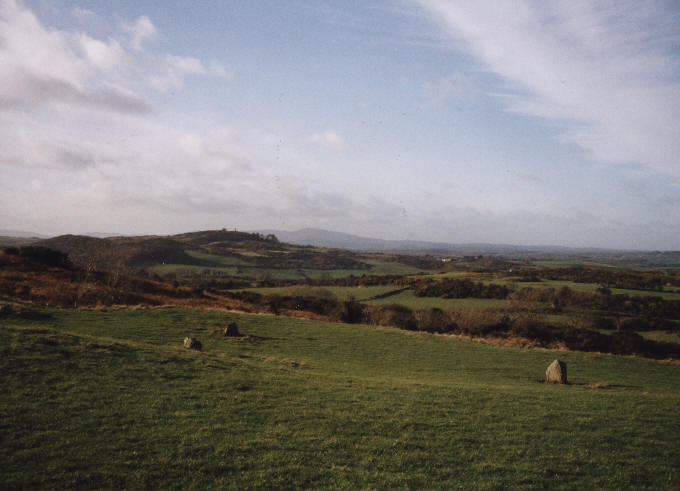 The Castle Mahon Stone Circle on Castle Mahon Mountain in County Down, near Strangford.  Three stones remain of the original seven.  This stone circle would date to perhaps 3200 to 2500 BC and would have been a ceremonial site.  It stands in a magnificent location from which one can see the Isle of Mann, Scotland, and the Mourne Mountains.  In the near distance in this photo one can see the mountain upon which stands a statue of Saint Patrick, whose first church was located in the town now known as Downpatrick.  Farther in the distance are the Mountains of Mourne.  The only evidence of a castle in the area is the circular outline of what was perhaps an ancient ring fort on this same hillock.  The location provides an impressive lookout for raiders in all directions.

It is unclear what influence the MacMahons had in County Down or to what extent they occupied the area.  What is clear is that they left their mark on the County in some of the place names there.  Castle Mahon mountain outside of Downpatrick provides one clue.  The Mourne Mountains another.  But the historical accounts remain unclear.  The accounts do suggest that a tribe of MacMahons migrated to Down around 1150 and a tribe of the Mugdorna, descendents of Colla Meann, also apparently migrated to the area.  The following references provide us with what little we know:

"A tribe of the Mac Mahons emigrated from Cremorne, and settled in the south of the present County Down, to which they gave their tribe name of Mughdorna, and which is now known as the barony of Mourne.  The Mourne Mountains owe their name to the same event, having been previously called Beanna-Boirche."  (sources: P.W. Joyce The Origin and History of Irish Names of Places)

Here is what P O Mordha has to say in The Medieval Kingdom of Mugdorna: "Before concluding it is only proper to say something about the territory of Mourne in south Down.  This territory was apparently called Bairche.  According to the Annals,  Muircheartach Mac Lochlainn gave this territory to Conchadh O Cearbhaill (O'Carroll).  This establishes some connection between the two areas.  Did O Cearbhaill transplant some of the Mugdorna to this place in an effort to have control over his own mensal land?  O'Donovan refers to the emigration of a tribe of the Mugdorna to south Down in the kingship of Niall the Haughty, son of Aedh, son of Magnus MacMahon.  Whatever the reason, it does seem certain that the Mugdorna of Monaghan gave their name to the area 'where the mountains of Mourne roll down to the sea'."

'Oh Mary this London's a wonderful sight
With people here workin' by day and by night
They don't sow potatoes, nor barley, nor wheat
But there's gangs of them diggin' for gold in the street
At least when I asked them that's what I was told
So I just took a hand at this diggin' for gold
But for all that I found there I might as well be
Where the Mountains of Mourne sweep down to the sea.' 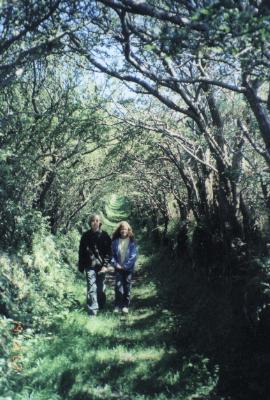 Next Chapter: County Monaghan and the Kingdom of Oriel

Much of the information on this page was taken from the very excellent research done by Hugh McGough.  You may view it in detail, and learn much more, at his site: