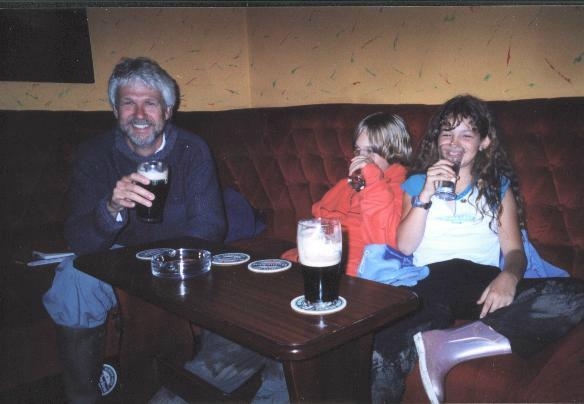 What can I say?  They made me do it.  Actually, it was Jeff's idea.  Here we are enjoying a bit of the Irish brew.

It would never be morning, always evening,

When Shakespeare, Marlowe and Jonson were writing

The future of England page by page

A nettle-wild grave was Ireland's stage.

It would never be spring, always autumn

After a harvest always lost,

When Drake was winning seas for England

We sailed in puddles of the past

chasing the ghost of Brendan's mast.

The seeds among the dust were less than dust,

The young sprout rising smothered in it,

cursed for being in the way -

and the same is true today.

Culture is always something that was,

Something pedants can measure,

Skull of bard, thigh of chief,

shall we be thus for ever?

Shall we be thus for ever?

Author's Note: Brother Michael was one of the writers of the Annals of Ulster

It was Bryan T. McMahon, publisher of the Ponchatoula Times, that first said about Monaghan, 'we went looking for a grandfather and instead found a lost Kingdom'.

It was my children who asked if I would take them to England.  In considering their request I hesitated greatly and fell upon the solution that we would take a vacation steeped in history.  In England we visited the Tower of London, moved on then to Stonehenge, and the mystical Avalon.  We drove through Caermarten in Wales, and ferried across to Ireland, returning afterward to England via Sterling in Scotland and then York.  Indeed, the history was incredible, and brutal.

But it was certainly Ireland that turned our heads and got our attention.  We had no idea what it was we were going to find there.  It was only when I'd begun the research for the trip and only due to the plethora of information now available on the web that we unearthed roots deeper than the ones we knew in Tullamore.  We knew that our grandfather had come from a poor farm near Tullamore.  That was our tradition, what we knew of our heritage.  But then I learned that the McMahon name had arisen in two distinct locations in Ireland, either County Clare or County Monaghan.  We tracked back.  A friend of Jeff's was also from Tullamore and provided the link to Monaghan, a link we are still hoping to confirm.  So, onward to Monaghan we researched.  We learned of the Kingdom of Oriel, three rebellious brothers who killed an uncle and started a Kingdom, and various tidbits about a land we did not know.

I booked three days time in Newbliss where we would explore Monaghan and three more in Strangford to explore County Down.  When we arrived in Newbliss, Martha O'Grady served coffee and fresh apple pie and said to us, 'Welcome to MacMahon's Countrie.'  Not knowing to what she referred, she pulled out Livingstone's The Monaghan Story and pointed out the chapters on the MacMahons.  We had no idea of the extent of information, the richness of the history and experience that this adventure into our past would provide.

My brother and I and my two children stood on the hill of Leck, Mullach Leachta, where the MacMahons crowned our Kings for some 400 years.  We could see the remnant of the crannog where the family began some time before the year 1000 AD, or the time at least when surnames emerged as distinguishing features of clans or tribes.  We held a ceremony in that spot and honored our long dead ancestors.

It was Brian MacDonald, of the Clogher Historical Society, who suggested that we develop a website.  He told us that McMahons today simply do not know of the richness of their roots, that the Clare McMahons have developed their history and the Monaghan McMahons have not, that other Monaghan clans have meetings and journals and share information and that we have richness of information to share, but are not doing so.  I struggled with that one.  A web site?  A lot of work for no purpose is what I thought.  I asked Brian and others what purpose we might pursue in such a venture.  What is the point? Such an effort must serve an end is my way of thinking.  The sharing of information leads us nowhere is how I felt.

It was Grace Moloney, a fine Irish woman who staffs the Clogher Historical Society, who suggested to us that if we really needed a purpose well then we could replace the coronation stone of the MacMahon Kings.  Well now, there is a purpose worthy of some effort is how her suggestion struck me.  And while Grace professed that in her role as staff of CHS she could not help us, she most certainly has provided links to every piece of information or contact we have made.  Many thanks to Grace.

So, after reflecting on the trip and coming home to Utah, returning to work and the daily grind, I observed that the excitement did not wane.  Even the children were struck deeply by Ireland.  We ventured forth with this effort and we continue now to reach out to others to see if they too might be interested in restoring the McMahon legacy.  Whether or not we are able to accomplish that task will be decided by the contributions of others.  To reach it is beyond our means alone.  If others choose to step up and join us, then it can and will be realized.

For us it began as a simple journey into the family roots on our father's side.  I had grown up witnessing in him a restlessness that he could not shake.  There was a desire in him to be closer to the land than our era allowed him, some deep tie to farming and land ownership that drove him or pulled at him and in the end I think was not ever entirely fulfilled.  He never knew of his Monaghan roots.  His knowledge of family history stopped in Counties Offaly and Roscommon.  I only wish that he had learned what we now know about our history.

Just as we crossed into County Monaghan a large raptor flew high above us, casting a very clear shadow across our path.  My son and I both saw it, though only vaguely.  From that point onward, the hills somehow seemed greener and rolled a bit more, the faerie forts emerged suddenly on the hill tops, crannogs and McMahon castles made their way into our perceptions.  I felt, and I think that my children felt, that we had truly crossed some border, entered into some new realm, a timeless realm, where we experienced the presence of our ancestors, where they showed themselves to us in every feature of the landscape.  We knew and we were aware that they knew, that we had come home....

No, no, no, I know I was not important as I moved

Through the colorful country, I was but a single

Item in the picture, the namer not the beloved,

O tedious man with whom the gods commingle.

Beauty, who has described beauty?  Once upon a time

I had a myth that was a lie but it served:

Trees walking across the crests of hills and my rhyme

Cavorting on mile-high stilts and the unnerved

Crowds looking up with terror in their rational facts.

Cried out-of-sense to them, while their timorous paces

I had a very pleasant journey, thank you sincerely

For giving me my madness back, or nearly.

The Firebird painted represented to me the rising of the McMahon legacy from its dormancy into the light of day.

I do hope that you have enjoyed perusing this website, that perhaps you have learned a thing or two, and most of all that you have come away with a greater understanding of your heritage, the stories that have gone into the making of who you are.  Best wishes to you always;  Jim McMahon