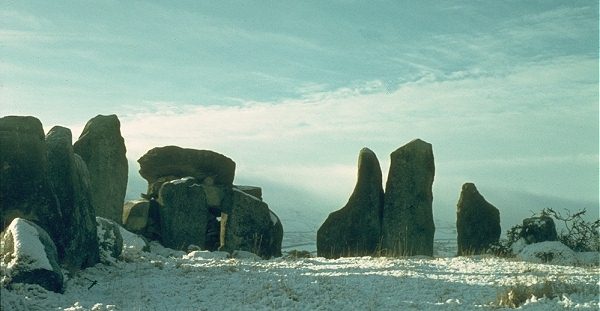 Clontygora (pronounced Clinchycora), County Armagh
This monument, dating to about 350 AD, overlooks the strategic 'Ulster Gap' between Dundalk and Newry, and, like many Court-tombs, commands a wide view west and south.  This could very well be the tomb of our ancestors.

"Fiacha Sraibhtine, after having been thirty-seven years as king over Ireland, was slain by the Collas, in the battle of Dubhchomar, in Crioch-Rois, in Breagh."

The Annals of the Kingdom of Ireland

~ by the Four Masters

We begin our story long ago, in the year 322 AD, when we are able to find written records of the activities of three brothers, known as The Three Collas, from whom the MacMahon line is descended.

"Fiachaidh Sraibtine, son of Carbri Lificar, son of Cormac Ul-fada, of the line of Erimhon, held the sovereignty of Ireland for thirty-three years, when he fell by the three Collas, in the battle of Dubh-Comar..."

As the story is told, the Collas were with King Fiachaidh, aiding him in battle, when word came of a victory by the King's son, Muredach Tirech, at a battle in Munster.  The Collas decided at that point that their best chance to rule all of Ireland lie in killing the old King, before he named his son as heir to the throne.  When the Collas made their intentions clear, one story suggests that the Fiachaidh consulted with his druid, Dubhcomer, after whom the battle site was named.  (Other sources cite the battle as named after the confluence of the Blackwater and Boyne Rivers)  The druid cited the curse of the Fingal and told the King that if he were to slay his nephews then the sovereignty of Ireland would be lost to his line forever.  On the other hand, if he were to be slain by the Collas, the curse would prevent them from assuming the sovereignty and pass to his heirs.  Thus, the forces of the Collas attacked the forces of the King and the King was slain in this battle.

'Of the three Collas have you heard,

Their names, all three, I know full well --

Carrell and Muredach and Aedh;

By these was slain a mighty king,

Carrell was Colla Uais, the king;

And glorious Aedh was Colla Menn.'

Collas Uais then assumed the sovereignty of Ireland for four years, until the Collas were deposed by Muredach and took refuge at the court of their mother in Scotland.  The King of Alba is said to have welcomed them and 'provided them military maintenance, by reason of their great valor and hardihood.'  They remained for three years after which they returned to Ireland and approached Muredach, then High King of Ireland.

'Have you brought me any news, my cousins?' asked the king.  'We have no sadder news to tell,' said they, 'than the deed which we have ourselves done, namely the killing of thy father by our hands.'  'That news is already known,' said the king; 'but it is of no consequence to you now, except that the misfortune, which has already pursued you, shall not leave you.'  (source: Keating)

According to the Irish Annals, "at the end of this year (327) the three Collas came back to Ireland, and went to Muireachach, having been instructed by a druid.  And they scolded at him, and expressed evil words, that he might kill them, and that it might be on him the curse of the finghal should alight.  As he did not oppose them they tarried with him, and were faithful to him." (source: http://www.ucc.ie/)

In the passage above, Muredach refers to the curse of the Fingal and, knowing full well that he cannot kill the Collas without suffering the curse himself, chooses to forego any retribution for the death of his father.  Apparently the Collas stayed with Muredach and became commanders of his army until such time that the king suggested they strike out and establish a territory of their own.  The king suggested that they take Ulster from the infamous Ulaid in retribution for a long ago insult to an ancestor.

The Collas then marched into Ulster where they engaged with the armies of the Ulaid.  The King of the Ulaid, Fergus Fogha was slain, Emhain-Macha sacked, and the Ulstermen routed.  The Irish Annals record for the year 331, "The battle of Achadh Leithdheirg, in Farney, was fought by the three Collas against the Ulstermen, in which fell Fergus, son of Fraechar Foirtiun, the last king of Ulster, who resided at Eamhain.  The (Collas) afterwards burned Eamhain (Macha), and the Ulstermen did not dwell therein since.  Colla Meann fell in this battle."

"The Collas first went to their kin in Connaught (King Muireadach) and there gathered a great army for the invasion of Ulster.  On the plain of Farney in Monaghan they met the Ulstermen under their king, Fergus, and on seven successive days broke battle upon them, finally slaying Fergus and putting the Ultach (Ulstermen) to rout.  Of the conquered portion of Ulster, from Louth in the south to Derry in the north, and from Loch Neagh to Loch Erne, the Collas made themselves the new Kingdom of Airghialla (Oriel)."  (source: http://www.ireland.org/irl_hist/hist11.htm)

"The Three Collas, who, on the ruins of the old kingdom of Uladh, founded a new kingdom - of Airghialla (Oriel) which was henceforth for nearly a thousand years to play an important part in the history of Northern Ireland."  The tribes and ancestors of the Collas are known collectively as the Airghialla.

Author's Note: On each page you will have a choice of following the story line or returning to the Index.  On some pages you will find additional links, either imbedded within the story or at the bottom of the page.  These will be in depth articles further expounding upon the details of the story told on that page and, in many cases, are the source of what we have written.  Links in black have yet to be written.

Next Chapter: The Three Collas

Ancient Uladh, the Kingdom of Ulster

The Ancient Legend of Brigid

The Legend of the Ulaid, Queen Macha, and the Red Branch Knights

The Curse of the Fingal

this map shows the establishment of Airghialla by the Collas: